The Making of a Virtual Christmas Pageant

The Making of a Virtual Christmas Pageant
December 13, 2020 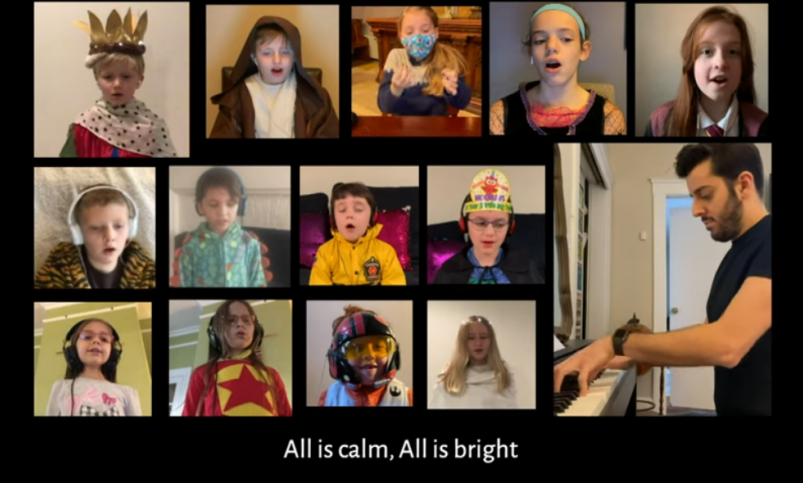 Haven't seen the Pageant yet? Watch it here!

At Old South Church, the third Sunday in Advent has become synonymous with our children's Christmas Pageant. Normally, the children work on this project during their “children’s choir” rehearsal beginning in early October, culminating in what is a flurry of costumes, stuffed sheep, and shepherds crooks that are handed out at the *very* last minute (to avoid tears and fights). The congregation will squeeze into the chapel and strain to catch each word and note. The pageant itself has been an Old South tradition for decades, more years than we even know. For the last 5 years it has been presented within a worship setting during 9:00 a.m. First Worship. But we’ve never had a pageant, or a year, like this.

This summer, as children's music leader Amy Budka and I began planning the new school year together, we agreed that, if at all possible, we wanted the children to work on a pageant -- even with the constraints of our current situation. We knew it would take a lot of work and flexibility - but we also knew that our kids might need a fun project like this. The pageant would have to be virtual – because we knew gathering would not be safe – which meant that rehearsal would need to be conducted from the beginning with the expectation to record videos of their lines, songs, and actions individually.

After an initial meeting to gauge interest and answer questions, families were asked to fill out an interest questionnaire – from which Amy cast the parts for the play. Amy and her team of helpers, Elizabeth Perry, Sofija Chroneos, and Lucy Costa, gathered with the students every Sunday after worship (meaning most students had already attended Church School at 9am, and worship at 10am) on Zoom to rehearse. These gatherings helped students to have a greater grasp on the storyline overall, and to better interact with each other through their lines. They practiced the songs as well, but each of the students generally had to remain muted throughout the singing, all listening to Ms. Amy’s singing and singing along with her (mutely to the rest of the gathering). It was certainly an odd way to be a choir!

We purchased the play from Beat By Beat Press – and Amy adapted it, as they rehearsed, for our situation and children.

Each student was given a list of videos to film for their roles – as well as a copy of each Christmas carol played by Jimmy Kamel, our accompanist, and sung by Amy. Students needed two devices to film the songs – one on which to listen to the music through earphones, and a second one held by a parent to film the student singing along to the music. This produced films where only the students’ voices are heard (as if they were singing a cappella) – when in actuality – they were singing along to the accompaniment in their earphones. We were able to have a single day of filming at Old South, where the two “adult” characters of Miss Julia and Pastor Cole were filmed. Rev. Shawn was the last minute videographer, when we realized that we truly needed a microphone – which required his phone to do the filming! All of the videos were due to be shared with me (Kate) by Thanksgiving. This was truly the handing off of the baton from Amy’s crew to production crew.

It took most of 10 days for me to edit the over 100 videos together. I used video editing software that I have been using to produce church school over these last 11 months – but this was by far the largest project I have done thus far. (Cyberlink Power Director) The spoken word portions were completed in sections and then uploaded for Amy’s team to review and respond with edits. Each section had several versions eventually – but they ended up much better than they began! I saved the songs for last – and they ended up taking much less time than I had feared they would.

The process for each short carol was this: 1) insert Jimmy Kamel’s piano accompaniment first. 2) Insert one child’s video – lining up their words to Jimmy’s accompaniment through both visually seeing the audio waves line up and hearing them align exactly. This takes some wiggling back and forth – but when they line up its really obvious to your ear. 3) Adjust each video visually by cropping them and then reducing the size of their “square” and lining it up on a grid. 4) Repeat steps 2 & 3 for each voice. Each carol had 15-16 voices – including Pastor Cole who was not visible in any of them (because of the storyline). 5) Figure out what you want to do for intro and outro for each.

I realized on day 8 that I needed help on subtitling the pageant – as I have only done that once before and I remembered it taking a very very long time. Pastor Shawn jumped in and agreed to figure out how to do it – and then to do it! He accomplished this on his day off last week – and is a rock star team player!

The pageant is the “sermon” in worship on Sunday Dec 13th, playing to a MUCH larger audience at 10:00 a.m. All-Church Worship, and it is certainly the most accessible pageant ever due to closed captioning! There were a lot of things mixed up about doing our pageant in this new-to-us virtual world, but is wasn’t all bad.

In a year when everything is hard and nothing seems normal - you will relish the close-ups on hammy actors, the hysterical they-made-it-themselves costumes, and the mostly-dulcet tones of our kiddos singing. They did such a WONDERFUL job, and have WONDERFUL senses of humor, all balanced with sincere wishes to convey the mystery and magic of Jesus' birth story. It's a little wacky, and very mixed-up, but perhaps that is the perfect tone to strike for this 2020 Christmas Pageant.

Thank you to the singers and actors, to their parents the videographers and coaches, to our staff/volunteer leaders Amy, Elizabeth, Sofija, Jimmy, and Lucy, and to Pastor Shawn who ended up as the last minute videographer, sound technician and subtitle-er extraordinaire! (They don't teach us this in seminary.)