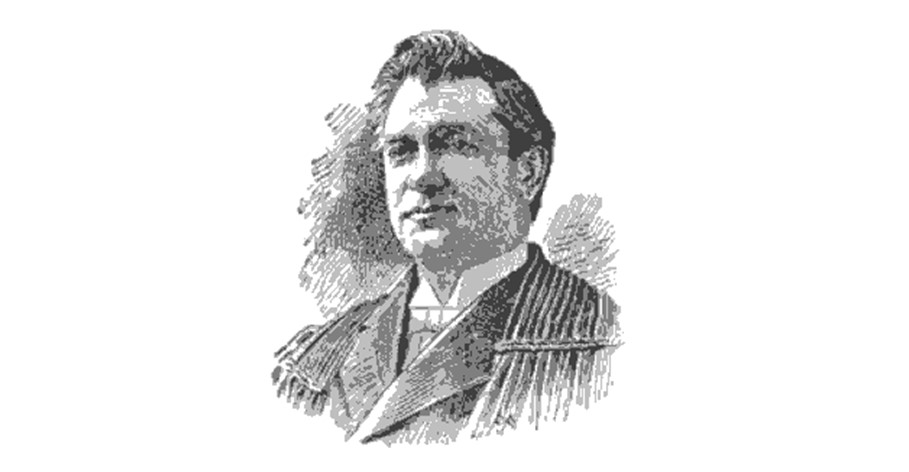 "What is the purpose and end of the incarnation, life, death, and resurrection of Jesus Christ? I answer that the purpose is the manifestation of the love of God, and that the end is the spiritual emancipation of the human race.”  –The Reverend George Angier Gordon, 1884

Old South Church’s 16th senior pastor was raised in Scotland by pious, Calvinistic parents. In his 1925 autobiography, Gordon recounts a childhood conversation in which he asked his mother, “If I should try all my life to be good, do you think I should get into heaven?” His mother answered, “No; not if Predestination is against you, many are called but few are chosen.” According to Gordon, this conversation steered him away from a life of faith for many years. While he would later return to his Christian faith, George Gordon wrote that his sense of mission stemmed from his desire to wrestle with and address what he labeled the “Calvinistic Scheme” (Gordon 1925).

From the very beginning of his 43-year ministry at Old South, George Gordon’s theological views set him apart from many of his predecessors and local colleagues. Before being formally installed as Old South’s pastor, he famously endured three hours of questions from other ministers about some of his unorthodox beliefs (The Old South Church & Society 1884). Most notably, Gordon refused to profess a belief in eternal punishment or in a theory of limited atonement. After finally being installed, George Gordon would go on to preach many sermons and several books that spoke of this kinship of God, Christ, and humankind. For Gordon, this kinship was at the heart of his understanding of the Trinity, and he rejected the Puritan notion that there was a great spiritual and moral gulf between Christ and humanity. Gordon’s writings and sermons were so influential that more than one religious historian has argued that he transformed the theological landscape of Puritan New England. (Olson 1944 & Youngs 1988).

AN UNEXPECTED FINDING AT THE CONGREGATIONAL LIBRARY

I was curious about George Gordon’s theology, and wanted to learn more about why it garnered so much attention. The chance to learn more came in the form of a 123-year old document at the Congregational Library.  I was working on a project on Old South’s senior pastors, and my goal was to read through at least one sermon delivered by each of our twenty senior ministers. When I started looking for the sermons of the Reverend George A. Gordon, I discovered that the Congregational Library had a large collection of his writings and over a hundred copies of his sermons. I only had time to read through one sermon, so I asked the archivist if I could see one with a particularly intriguing title: “The Eternal Pledge of Progress.” George Gordon delivered this sermon at Old South on the morning of April 30, 1899.

When the archivist delivered this old document to me, I discovered that it was a formerly published booklet that contained more than Gordon’s sermon. It included a summary of a special meeting of Old South’s Deacons held on March 28, 1899 and a synopsis of a larger, all-church meeting exactly a month later. At the March 28th meeting, the Deacons decided that it was time for the Old South membership to vote on a formal resolution to set aside the Westminster Confession of Faith as the official creed of the church. On April 28th, 1899, the Old South members voted overwhelmingly in favor (134 yays and 6 nays) of setting aside the Westminster Confession as the church’s creed. Two days later, George Gordon honored this historic moment with the sermon titled “The Eternal Pledge of Progress.” George Gordon’s eloquent dedication at the beginning of the sermon reads: “This Sermon, which speaks of things that are shaken, is affectionately dedicated to the people of the Old South Church in the name of faith that cannot be shaken.”  (Gordon, 1899).

ABOUT THE WESTMINSTER CONFESSION

What was the Westminster Confession? This was one of the key documents composed during the Westminster Assembly, a gathering of 121 Puritan ministers and Church lay leaders in England in 1643. The Confession of Faith was a comprehensive theological statement that consisted of thirty-three chapters that drew heavily on the writings and thought of John Calvin. The third chapter outlined the doctrine of Predestination, the belief that God elects a limited number of people who will be “saved.” While the Westminster Confession originated in England, it was never formally adopted by the Church of England. Instead, it became the doctrinal standard for Scottish, English, and American reformed churches, including New England Congregational Churches (Hillerbrand 2003). Consequently the church had adopted the Westminster Confession as the official “Creed of the Old South Church in Boston” in 1680 (Gordon 1899).

WHY DID THE OLD SOUTH LEADERS INITIATE THIS VOTE?

The synopsis of the March 1899 meeting reported several reasons why the Old South Deacons felt that it was time for the congregation to vote on the status of the creed.  Several deacons noted that since the 1830s, new members had not been required to profess their spiritual allegiance to the Confession. In 1836,  Deacon Samuel Johnson’s own mother told the Reverend Dr. George Blagden (OSC’s 14th Senior Pastor) that she would never have joined the church if she had read the Creed beforehand. Dr. Blagden assured her that she did not need to give the Westminster Confession a second thought. Later, the Reverend Jacob Manning refused to confess to the Creed in its entirety when he became a pastor at Old South (Gordon 1899).

Moreover, the deacons recognized that the harsh theology espoused in the Westminster Confession played a significant role in the sharp decline in the number of Congregational Churches in New England. Many Congregational churches had become Unitarian because the members did not want such strict tests of faith (Gordon 1899). Consequently, George Gordon was known to joke that he was the only Trinitarian left in New England (Youngs 1998).

The deacons had also been influenced by a recent controversy at nearby Andover Theological Seminary (now Andover Newton Theological Seminary at Yale University). Founded to be a stronghold for conservative Congregationalists, all new faculty members had to recite a shorter version of the Westminster Confession at their inaugural ceremony. But Andover had five new liberal faculty members in the 1880s. Seeking a more generous faith, these faculty members outlined a “new orthodoxy” in issues of  the Andover Review in 1884, the same year Goerge Gordon began his ministry at Old South. They rejected some aspects of traditional Puritan thought and emphasized humanity’s ability to seek redemption and avoid eternal punishment. This controversy at Andover led to a well-publicized court battle in 1892, and the liberals eventually prevailed (Shear 2010).

"THE ETERNAL PLEDGE OF PROGRESS"

Two days after Old South’s historic vote to set aside the Westminster Confession, George Gordon preached “The Eternal Pledge of Progress.”  I cannot do justice to this poetic, thirty-three page sermon, but George Gordon’s elation comes through loud and clear.  He praised Old South’s Puritan ancestors for what he described as their “sublime ethical idealism.” But he asserted that this same idealism rendered the Kingdom of God inaccessible to human beings. God, he said, was an “infinite mystery” to the Puritans, and they dealt with that by preaching a belief in an uncrossable spiritual chasm between God and humankind. Gordon lamented: “If the Puritan had only had the courage to say that he did not know!” For Gordon, a belief in Predestination contradicted Christ’s mission, which was to “declare God’s equal and eternal love for every human being that he has made.” Gordon framed this sermon within a broader meditation on his faith in a Christianity that changes and grows alongside human beings. God, said Gordon, is a “great innovator” (Gordon 1899).

It is easy for me to imagine that April 28, 1899 was a climactic day for the Reverend Dr. George Angier Gordon. “The Eternal Pledge of Progress” must have been the sermon he had always dreamed of preaching. For fifteen years, he had been sharing his vision of an immanent God whose love for humanity was unconditional and boundless. His vision came to fruition when the Old South Congregation voted to set aside the “Creed of the Old South Church in Boston;” a vote that heralded a new beginning for Old South and the wider Congregational Church.

Gordon, George A. The Eternal Pledge of Progress: A Sermon. Boston: The Riverside Press, 1899.

———. My Education and Religion: An Autobiography. Cambridge, Massachusetts: The Riverside Press, 1925.